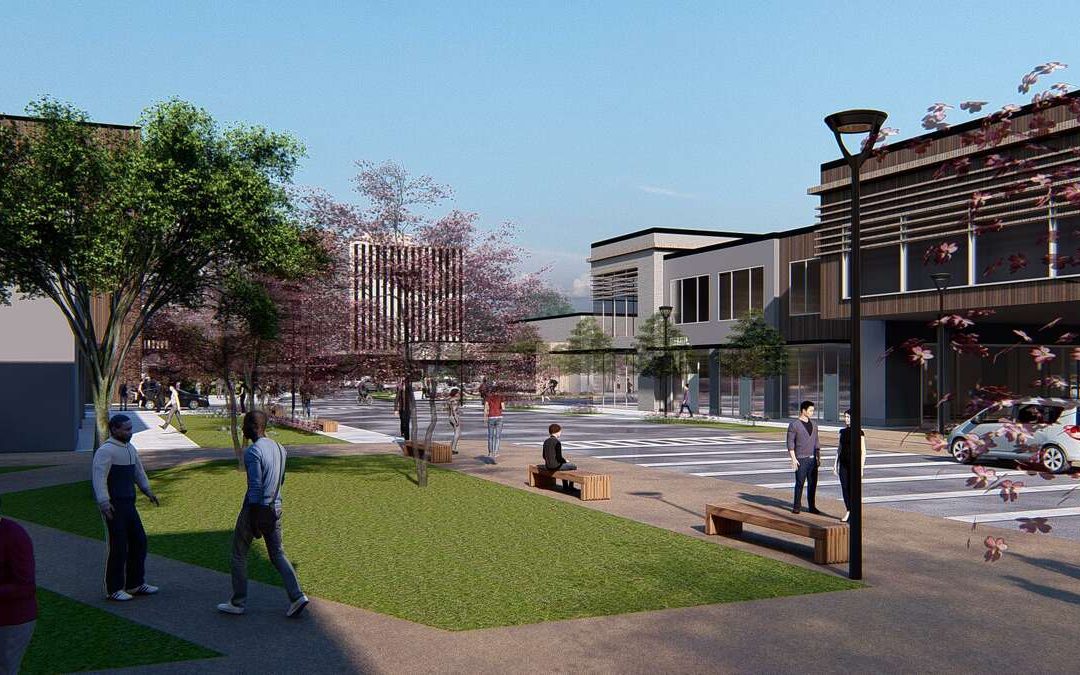 BELLAIRE, Texas – (By Michelle Leigh Smith) – Thirty acres of land in one of the most affluent communities in the Houston area, bolstered with frontage on Loop 610 sounds like it has all the ingredients for a landmark mixed-use development.

After all, it’s only a mile or two due south of  The Galleria, the world-famous development created by the late legendary developer, Mr. Gerald D. Hines. After all, the Bellaire acreage, formerly a Chevron corporate campus is near million-dollar homes and an abundance of buying power packed into a center-city location with almost non-existent commute times.

However, this land is located in Bellaire, an independent municipality where city officials seem to have as much say-so over what’s built as the developer.

So, after three years in Planning and Zoning and the governmental regulatory vortex, plans for a development called “Bellaire Place” have finally emerged.

Some may call Bellaire Place a mixed-use project. However, this project will be missing a few of the uses you might find in a normal mixed-use development.

And, of course, the city has imposed height restrictions, lest anything resembling a skyscraper might be erected.

“I didn’t get everything I wanted,” says developer Danny Sheena, of SLS Properties, which acquired the property from Chevron in 2018. “I thought high-end multifamily like what you find in Rice Village or the River Oaks District would be nice.  The most resistance I received was for multi-family housing.  I can have a theater so long as it’s part of an amusement, for example, along with a bowling alley, restaurants in an entertainment center.”

The parameters which Sheena must stay within reflect Bellaire leadership’s tight reins on development. A community overview from the City Finance office in Bellaire cites a recent Regional Growth Forecast from the Houston-Galveston Area Council, saying the continuing growth in Bellaire since 2000 reflects ongoing residential redevelopment as well as the renewed presence of younger families, with the average household size at 2.7 in 2019. “Given its enclave status and the extent of developed land in Bellaire, any significant growth would have to come through higher density housing, replacement of former commercial sites with residential development and/or a higher rate of family formation or increase in average household size, which could also reflect some seniors moving in with their families.”

“At the end of the day, it’s a great project and I think this is a great start,” he said. “At least now I know that we can build what we envisioned.However, this is the first step.  We now have to get amazing tenants, get building permits and complete construction. We want to make Bellaire a better city, a place that our generation and the next will enjoy.”

In his presentations, Sheena has compared his Bellaire concept to City Centre or the River Oaks District – two highly regarded and dense mixed-use Houston developments that have received recognition from the real estate community and organizations such as the Urban Land Institute.

“Tenant mix is important to the success of a development and one of our highest priorities,” Sheena says. “Every community deserves a destination with a balanced mix of stores.”

Sheena has engaged the architecture firm of Kirksey and DDG Landscape Architects to complete a plan that will result in more than 1 million SF of mixed-use space.

Sheena plans two new office buildings that will front on the West Loop, and seven other multi-use buildings for restaurants, entertainment and retail.

Since the zoning approval, days at SLS Properties are consumed with meetings with top agents, brokers and potential tenants.

Constructing office space deserves thoughtful concern in today’s market. Overall, the Houston office market has some of the highest vacancy rates in the nation. And many companies are contemplating reducing their office footprints while work-from-home policies expand in the workplace,

Sheena describes his plans for tenant mix as similar to what may be found in Rice Village – art galleries, restaurants, banks, credit unions and medical offices. The vision brings an interesting amalgam of much-needed amenities to one of Texas’ wealthiest enclaves.  His 71 percent lot coverage clocks in at nine percent  less than what is required in the North Bellaire Special Development District (NBSDD) zone.

At present, Sheena says he has leased 100,000 SF to Methodist Hospital, part of which is up for sublease and 300,000 SF to Harris Health System, both in the existing V-shaped buildings that once housed 900 Chevron employees.

The former Chevron site, which has a 10-story building built in 1977 and huge expanses of manicured lawns, represents one of the largest parcels of available land in the Inner Loop area of Houston. From the 1990s on, Chevron was the largest employer in Bellaire until it moved downtown in 2017.

“The road to Bellaire Place, at the site of the former Chevron campus, has been a long and often arduous one,” Bellaire Mayor Andrew Friedberg said in his city blog. “Which is as it should be; for the project to be a success it must be mutually beneficial for both the developer and the community.”

According to the zoning restrictions of the Bellaire Comprehensive Plan, the Bellaire Place land cannot be used for any residential.

“The Comprehensive Plan said no multifamily,” said attorney Nathan Wesely, a councilman who is now serving his second term.  “Any sort of residential use was off the table. The deed restrictions also say it cannot be used as a park. There is a large grassy area, but it’s not designated as a park.  It will look like a park. There are 65 feet at the north side that is dedicated green space.”

Sheena said that according to his directive from Council, he can build a hotel if and only if he can’t lease space in the U-shaped building to an office tenant.

“Sheena cannot build a hotel – if staff told him that they are wrong,” says Wesely. “He would have to submit a revised planned development. I voted against the zoning because it included a hotel, in terms of type of traffic you generate. You have the same problem with multifamily.  If you have a restaurant that fails, a new restaurant will come in that might be nicer.  Yet when hotels and apartments start going downhill, there may be a new buyer willing to put up with the crime as long as someone will pay rent. There really is no bottom.”

The Bellaire Place plans also include “Building E” a 30,000 SF, 2-story rectangle facing S. Rice for either indoor athletic facilities, music or art studios or a combination of bars and restaurants, and “Building F”, a 75,000 SF 3-story at the corner of S. Rice and Fournace, targets general retail sales and services.

“It feels great to finally have zoning,” said Sheena.