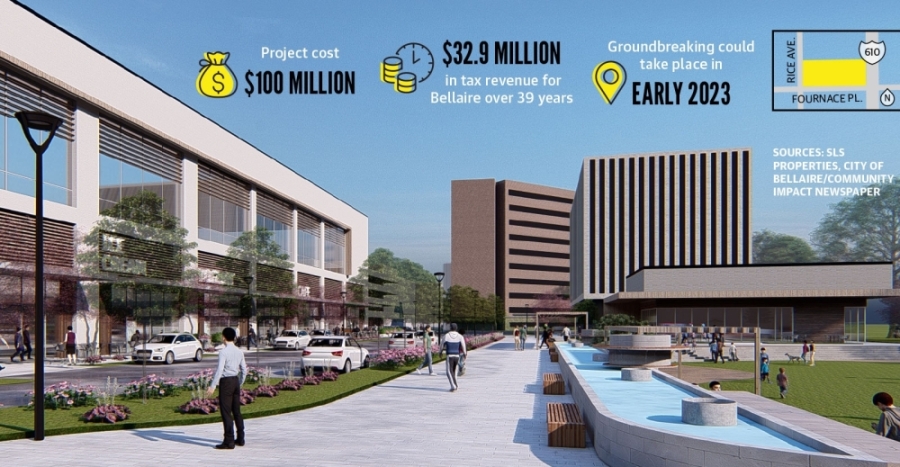 After years of rezoning and fine-tuning city ordinances, plans for a 30-acre campus in Bellaire are moving forward and could ultimately bring a slate of new restaurants, office space and entertainment venues to the city.

In 2017, oil and gas giant Chevron vacated its corporate campus in Bellaire. In September 2018, the property was sold to Houston-based real estate company SLS Properties.

Preliminary plans for the former Chevron property—also known as Bellaire Place—include a park flanked by multiple restaurants, multistory mixed-use buildings with bars and other entertainment concepts, and more than 250,000 square feet of new office space, according to a preliminary SLS site plan.

The process of getting to this point has not been easy, SLS Managing Member Danny Sheena said.

“There are many restrictions on the property—over 100 restrictions placed by [Bellaire] City Council,” he said. “Some are more complicated than others, but we hope that we can make this a development that the city would be proud of.”

At 30 acres, the project will mark one of the largest commercial areas in the city. It will join a 30-acre urban village tract at Loop 610 and the Westpark Tollway and a roughly 25-acre downtown area straddling Bissonnet Street.

By comparison, the Galleria in Uptown Houston is roughly 55 acres, while Rice Village near West University is 20 acres, according to site maps.

Leading up to the approval of development permits for the site, the Bellaire City Council made multiple changes in the last two years with the goal of protecting nearby residents. Although council members said they were overall pleased with the results, several said they were concerned not enough was done to address resident concerns, including additional traffic generated by the project.

In a statement, Bellaire Mayor Andrew Friedberg said the project represents a “shot in the arm to our tax base,” and in an interview with Community Impact Newspaper, he said the process by which the city arrived at the current plan demonstrated sensitivity to resident concerns.

“I think it’s entirely appropriate that we took our time [and] listened to everyone’s input, and if you look at the final product, it demonstrates our responsiveness to those concerns and I think … ends up stronger for all parties,” he said.

The campus is being redeveloped in an area bordered by South Rice Avenue to the west, residential development off Mayfair Street to the north, Loop 610 to the east and Fournace Place to the south.

SLS included in the purchase two midrise office buildings that already exist on the site—one six stories, the other 10—as well as a heating, ventilation and air conditioning plant. Immediately after the acquisition, SLS requested permits from Bellaire to construct a four-story parking garage, which was completed in 2020, Sheena said.

Site maps depicting preliminary plans include a new five- to six-story office building along Loop 610; a four-story office building and two-level garage in the site’s northeast corner; three single-story buildings for restaurant space along Fournace Place; four multipurpose buildings for retail, dining and office use; and a two-level garage in the northwest corner of the campus.

In total, the new project will be built for more than $100 million if fully developed, Sheena said. None of the existing infrastructure is planned to be torn down or redesigned.

In October 2021, SLS commissioned a report by Community Development Strategies—an economic research and consulting firm—which found the property would be worth $120 million if fully developed and contribute $32.9 million in taxes to the city of Bellaire over the course of 39 years after it is built. The city of Bellaire is not funding the project in any way, including through tax abatement or economic development agreements.

When first acquired by SLS, the plan was to transform the area into a multifamily housing zone according to Sheena. However, those plans were shot down by the Bellaire Planning and Zoning Commission, he said.

“We were told no multifamily and no assisted living,” he said.

So plans evolved, and the city took the reins on determining what would be allowed in the district, Sheena said.

“City Council said that I’m not the applicant. … The city of Bellaire would be the applicant trying to rezone my property,” he said.

In April 2021, Bellaire held public hearings to give residents a chance to voice their feelings and concerns about the development. That May, Bellaire officially rezoned the district where the campus will be located, calling the new zone the North Bellaire Special Development District.

Over the next 10 months, the city went through another round of public hearings and several ordinance revisions. Over that time, restraints were placed on the developer with amendments to the ordinance that prohibited drive-thrus, tattoo parlors and throughways to Mayfair Street.

Residents expressed concerns about building height and light pollution that could come from lighting placed on the roofs of parking garages, according to city council member Catherine Lewis. As a result, the council reduced the maximum height of buildings and added a requirement that opaque walls be placed to block lighting from the garages during their February 21 meeting.

Four years following the district’s acquisition, Bellaire City Council approved the special development permits for SLS on March 21, greenlighting the next steps required for work on the project to begin.

“We have set the framework for a strong, commercially viable development which should provide numerous benefits to Bellaire and its residents while doing it in a responsible manner focused on minimizing or mitigating the impacts of the development on surrounding areas,” said Ross Gordon, Bellaire council member and former planning commission chair.

The special development permits were approved unanimously at the March 21 meeting for the Freeway Portion and the Fournace Portion, but two council members—Lewis and Jim Hotze—opposed the Rice Portion for not meeting enough of the residents’ concerns.

Effects on the neighborhood

Throughout the permitting phase, one concern came up repeatedly from both the City Council and the residents who live near the project: traffic.

“I am worried about the potential traffic that this project will cause to the people who live on Tamarisk [Street], Wedgewood [Drive] and Anderson [Street],” resident Benjamin Lewin wrote in comments submitted to the council on Feb. 16.

Other problems expressed by residents at that time included light and noise pollution and the potential for an increase in crime. However, not all resident feedback was to relay worries.••“A nice development like this will dramatically improve the quality and residential character of the surrounding area,” resident Rafi Zitvar wrote to council on Feb. 16.

Although Council approved the site plan, Friedberg said no more than 70% of the total square footage may be developed without further approval, as part of the agreement between the city and SLS.

The city is also preparing for the potential future widening of South Rice Avenue, though such a project would be taken on by the city of Houston and Bellaire would not be directly involved.

Sheena said the project is still a long way from breaking ground, but construction could begin in early 2023.

“There is a demand in Bellaire for nearby gathering spaces, restaurants, services and retail shops, and I hope that this development can contribute to an ever enhancing quality of life for our Bellaire community,” Gordon said.

George joined Community Impact Newspaper in December 2021 after graduating with a degree in journalism from Southern Illinois University’s College of Mass Communication and Media Arts.